The Eddies is an opportunity to amplify, empower and celebrate professionals working in the area’s wide-ranging music scene.

This year, we honor 210 finalists in 36 categories for their work during 2021. Nominations and voting are determined by a group of judges representing the local music community. Each judge is provided with a copy of the quarterly Local 518 Music (and More) Reports for the year in question. This has been produced by Andy Gregory at WEXT since 2012; copies are available for free on the station’s website. This is a very thorough almanac of record, album and video releases in the market, complete with links to the work. We feel that this is the best way to ensure work is not overlooked.

View the full list of 2022 categories and nominees at TheEddiesAwards.com.

Buggy Jive is a soul rock singer-songwriter who describes himself as “equal parts (Led) Zeppelin and D’Angelo and Prince and Joni (Mitchell).” He has been nominated in each year of the Eddies Music Awards including a record five nominations this year and was a winner of Video of the Year in 2021 for “Ain’t Going Anywhere.”

Nite Train w/ Thomasina Winslow is a seven-piece blues outfit that has been active in the Capital Region for 19 years; singer-guitarist Winslow joined the band in 2019, the year that the band was an Eddies Music Award nominee for best blues act. The band released the album “Cat on A Mission” in late 2020.

Hot Club of Saratoga is a gypsy swing collective that plays a repertoire that reflects the spirit and style originated by Django Reinhardt and Stéphane Grappelli in The Quintet of the Hot Club of France that was prominent in the 1930s. The act is a 2022 Eddies nominee for Best Jazz Artist.

Rich Ortiz is a singer-songwriter who has opened for Chicago, REO Speedwagon, Styx and many other touring artists. He is a three-time Eddies nominee for Solo or Duo Performer of the Year (covers category), having won in 2019.

Rock trio Super 400 has released one live and four studio albums in their 26 years. All proceeds from their sold-out Troy Music Hall benefit concert on March 23 will be donated to Ukraine humanitarian relief. They are 2022 Eddies nominees in the Rock/Pop Artist of the Year category.

Erin Harkes, a full-time musician and part-time comedian, was a 2020 Eddies Music Award winner in the Solo or Duo Artist of the Year (Covers) category and was a 2021 Eddies Merit Award recipient for her tenacity in developing alternative sources of income during the pandemic. She is nominated this year in the Record of the Year category for “New Year’s Day” and will perform with her seven-piece band during the awards ceremony.

The Eddies Music Awards are an initiative of Proctors Collaborative.

Brought to you by: Media sponsors: 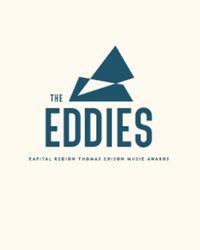