The great Carl Reiner directs Steve Martin in his very first film. Martin plays Navin R. Johnson, the white adopted son of African American sharecroppers.  To say that he is not terrifically bright is an understatement, as he has grown up naïvely unaware of his obvious adoption. Standing out, not only because of his skin color, but also because of his inability to dance to the spirited blues music his family enjoys, he is finally told the truth, and on that same day discovers his inner “Crazy Rhythm” upon hearing that rather tame song on the radio as performed by famed big band jazz orchestra.  Accepting this music as his beacon, he decides to hitchhike to St. Louis from where the song was broadcast.  Along the way, he invents gadgets, joins a carnival, seeks love and draws the unfortunate attention of a lunatic serial killer.  Also starring Bernadette Peters and Jackie Mason, with a very special appearance by legendary folk-blues artists, Sonny Terry and Brownie McGee. As with other ICFS events, expect prizes, surprises, comfy couches and idiotic drink specials!  Rated R for sexual humor, some drug use, some violence, and language. 93 minutes. 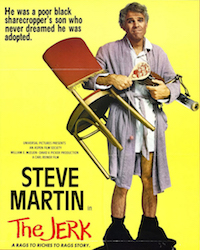