Gila Films presents the theatrical premiere of our debut feature THE LAST FRANKENSTEIN. An independent horror film shot in and around Amsterdam, NY, our movie is a modern day spin-off from Mary Shelley’s classic novel.

THE LAST FRANKENSTEIN follows Jason Frankenstein, the last of his family line. Buried in a dormant life and a dead-end relationship, he frustratingly struggles to complete his ancestors’ infamous experiment. But the brutal reappearance of a creature from his past provides the catalyst to move him forward. Aided by a pair of drug-dealing paramedics and a nurse with a shady past, Jason sets down the path to create a living being from the bodies of the dead.

An “existential slasher”, THE LAST FRANKENSTEIN combines in-depth character study with all the blood and terror that are trademarks of the horror genre. Heavily influenced by artistic styles of the late 1950s thru the mid-’80s, our film overflows with hands-on effects, mid-century locations, and vintage aesthetic and features appearances by veteran cult movie actors Robert Dix (FORBIDDEN PLANET) and Jim Boelsen (STRANGE BEHAVIOR)…all of it set to an unforgettable electronic score. Come enjoy the Halloween season with our cast and crew at this one-night only event! 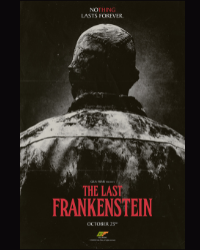