Frustrated with the direction of the church, and prior to his becoming Pope Francis, Argentinian Cardinal Jorge Bergoglio (Jonathan Pryce)  wrote to conservative Pope Benedict (Anthony Hopkins) requesting permission to retire.  Facing scandal and self-doubt, the introspective Benedict responded by summoning the Cardinal – his harshest critic – to Rome for a meeting.  Behind Vatican walls, the two sought common ground, hoping to forge a new path for the church.  Pryce and Hopkins were both nominated for Academy Awards for their performances: Pryce for Best Actor, and Hopkins for Best Supporting Actor.  Rated PG-13 for thematic content and some violent images.  125 minutes. 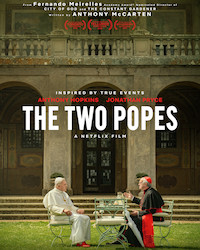