ICFS Cinema Other presents
TIGERS ARE NOT AFRAID

With its ragtag group of kids, ghosts bent on revenge, and fairy tale elements that appear to have been inspired by Pan’s Labyrinth, TIGERS ARE NOT AFRAID has little in common with ONE CUT OF THE DEAD other than universal acclaim.  We are at some northern border. Any of them. All of them. Amidst an ongoing drug war, 10 year old Estrella lies on the floor of her classroom hoping that the gunmen whose shots are echoing through the building don’t get too close. Her teacher, seeing how she’s shaking, presses three pieces of chalk into her hand and tells her that she has three wishes.  Upon returning home, Estrella’s first wish is for her missing mother to return.  She does, but she is a ghostly apparition. Petrified, Estrella escapes to the streets to become part of an uneasy alliance of children orphaned by violence. She will soon learn that the dead cannot be left behind, however.  She will also learn that wishes never come true without a price being paid.  TIGERS ARE NOT AFRAID is a horror film that will haunt you – and touch your heart – for a very long time.  83 minutes. Not Rated. In Spanish with English subtitles.

SPECIAL COMBO DEAL:
$14 to see both TIGERS ARE NOT AFRAID and ONE CUT OF THE DEAD.
Tickets for both movies must be purchased in a single transaction, and are
available only via phone or in person at our box office. 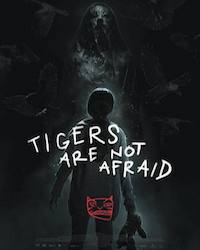