It Came from Schenectady is excited to welcome MST3K’s Jonah Ray, plus Dave & Ethan’s 2000” Weird Al Podcast to Proctors for a 30th Anniversary screening of Weird Al’s UHF to be preceded by a live and in person 45-60 minute interview between Jonah Ray and the hosts of the definitive Weird Al podcast, Dave “Elvis” Rossi and Ethan Ullman.   Jonah is eager to discuss his love for Weird Al and UHF, and will also take questions from the audience!

In addition to being the current host of Mystery Science Theater 3000, Jonah Ray is known for his series on Comedy Central, numerous TV appearances, for co-hosting Chris Hardwick’s “Nerdist” podcast, and of course, his love for Weird Al & UHF!

Dave & Ethan’s 2000″ Weird Al Podcast is a weekly podcast based around all things “Weird Al” Yankovic, known for their in-depth interviews with those associated with Weird Al.

And, of course, no screening of UHF would be complete without Twinkie Wiener Sandwiches and Yank-a-ritas at the bar!

***Plus after the event – be sure to catch Jonah Ray headlining Pretty Much the Best Comedy Show, also at Proctors, starting at 8pm!  Click the PMTBCS link for tickets to that event. 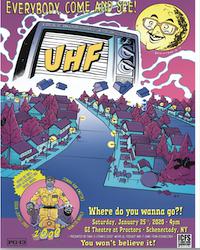