Welcome Home is a terrifyingly accurate (yet hilarious) depiction of three thirty-somethings forced to move back home and as the series shows, living again with your family is not for the faint of heart. The charm and heart of this series makes it a must watch in our book!
-TownSpot TV

Recently won the Award Of Recognition for Television Program/Series at this year’s IndieFest Film Awards.

When life handed them lemons, they moved back home with their parents.

“Welcome Home” is a cross between “Modern Family” and “It’s Always Sunny In Philadelphia.”

Its story revolves around Ron, Justin, and Jen who are old high school pals that find themselves living back in their same hometown in upstate New York.

Justin (Justin Alvis) is a failed copywriter who’s forced to sell his apartment in Brooklyn and move back with his widowed mother, Janet (Amy Freinberg). Upon the return to his childhood home, he’s greeted by his shirtless childhood babysitter Jared (Greg Aidala), who’s now dating his mother. Justin just wants to get back on his feet and out of his hometown as well as for Jared to put a damn shirt on.

Jen (Mindy Miner) has been living at home with her parents (Angela Potrikus & Vernon Aldershoff) and Alzheimer’s stricken grandmother (Sheila O’shea) in order to save money for the wedding and house she plans on building with her fiancé Chris (James Dippo). When Chris stands her up on their wedding day, Jen’s life get’s flipped upside down. Jen just wants to get out of her controlling parents house, find a new man, and for her grandmother to remember to take her diaper off before showering.

Ron (Daniel B. Martin) lives in his younger brother, Bobby‘s (Bobby Chase) garage. Ron and Bobby’s parents have been deceased for a few years, leaving the house to Bobby. Ron doesn’t have a whole lot of ambition, in fact he’s a compulsive gambler who will bet on even the most obscure sports and everyday activities. Ron just wants to move out of the garage and into the main house, chase loose women, and relive his glory days as a star football player in high school.

The series revolves around the never-ending effort of the three of them trying to better their lives and regain their status level in their home town.

Filmed locally and features over 60 cast members including, Karen Tararache, Kate Welshofer, and many more! 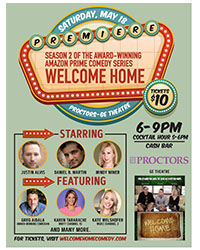